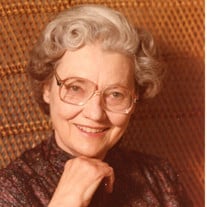 Mrs. Vera Jeanne Lange, 97, of Penney Farms, passed away Thursday, November 11, 2021. Jeanne was born November 2, 1924, in Wolsey, South Dakota to parents Cyrus Asa and Olive (Taylor) McFarling. After high school, Jeanne left the farm to work in the War Office in Washington, D.C. during World War II. She attended Anderson College in Anderson, Indiana, where she married Alfred C. Lange. Besides homemaking, Jeanne was a prolific writer and editor for Christian publications, and with her husband, did missionary work for nine years in Japan for the Church of God. They returned to the U.S. in 1963, where they lived in Ann Arbor, Michigan. She spent many years in Michigan volunteering for Christian women’s organizations and writers’ conferences. Jeanne moved to Penney Farms Retirement Community in 1990, where her commitment and enthusiasm for volunteer work in her community continued. Jeanne loved traveling worldwide with family and friends, which she kept up well into her 90s. Jeanne served as an inspiration to many individuals through her writing and through the exemplary way in which she lived her deep Christian faith. Jeanne held a special place in the hearts of her far-flung multi-generational family and was a much loved “go-to” person for her wit and wisdom in over 40 years of family reunions held around the country. Other than her parents, she was preceded in death by her husband, Alfred C. Lange, and siblings, Louis McFarling, James, May (Benthin), Calvin and Robert. Survivors include her siblings, Theodore McFarling (Gay), Vivian J. Lowe and George McFarling (Jeanette) and her son, Steven K. Lange (Hannelore) of Germany, her daughter, Nancy E. Redfern-Vance of Tallahassee, her grandchildren William E. Redfern III (Laura), Patrick S. Redfern (Jennifer), Sandra G. Lange, and multiple nieces, nephews, and six great grandchildren. Graveside services will be held on Monday, November 22, 2021, at 1:00 p.m. at Penney Farms Cemetery. There will be a memorial service honoring her life held at Penney Memorial Church at 2:00 p.m. the same day. The family requests that those who wish to express sympathy consider donating to Jeanne Lange’s favorite charities, Habitat for Humanity, Southern Poverty Law Center, American Friends Service Committee, Doctors Without Borders or UNICEF . Arrangements are under the care of Helm-Gallagher Funeral Home & Cremation Services, 1811 Idlewild Avenue, SR 16, Green Cove Springs, FL 32043. 904-284-9696. www.helmgallagherfh.com

The family of Mrs. Vera Jeanne Lange created this Life Tributes page to make it easy to share your memories.

Send flowers to the Lange family.