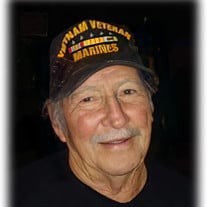 Mr. Lawton “Butch” Williams Parrish, Jr., 75 of Middleburg, Florida passed away Tuesday, November 16, 2021. Butch was born May 7, 1946 in Birmingham, Alabama to parents Lawton Williams Parrish, Sr. and Drexel I.V. (Hicks) Parrish. Butch proudly served his country as a United States Marine and he was a Vietnam veteran. After his service he worked at Eastern Airlines as an aircraft painter. He later started his own aircraft painting company and painted many aircrafts,, including a P51 Mustang and Donald Trump’s private jet. He loved God, his family, his dogs, and his Country. At first, Butch seemed intimidating but all soon learned he was a teddy bear at heart. He will be remembered for helping anyone in need. Butch enjoyed riding his Harley Davidson motorcycle and fishing. He often volunteered at the VFW and the American Legion. Butch is preceded in death by his parents, his wife, Janet Parrish and his sister, Carole Voyles. He is survived by his son, Stephen Parrish, his daughter, Brittney Lima, his sister, Cheryl “Sherry” Paradis (James) and his grandchildren, Avie and Bear. Also surviving him are his nephews Dale and Michael (Lisa), his nieces, Dee Dee (James) and Michelle (Bobby), his grand nephews, Thomas, Isaiah and Chris, his grand nieces, Summer and Danielle and also his beloved dog Dexter. Service arrangements are to be determined. In lieu of flowers, the family requests donation be made to the VFW The Veterans of Foreign Wars (VFW) or the American Legion Donate Online (mylegion.org). The Middleburg V.F.W. will be having a Celebration of Life for Butch at 3:00 p.m., Sunday, December 12, 2021, at the V.F.W. post. The family will be having a Celebration of Life in Alabama to be announced at a later date. Arrangements under the care of Helm-Gallagher Funeral Home & Cremation Services, 1811 Idlewild Avenue, SR 16, Green Cove Springs, FL 32043. 904-284-9696. www.helmgallagherfh.com

The family of Mr. Lawton "Butch" Williams Parrish created this Life Tributes page to make it easy to share your memories.

Send flowers to the Parrish family.