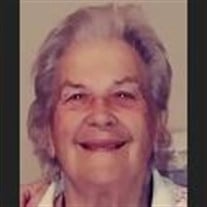 Elise B Priest gained her heavenly wings to be with the Lord, family and friends on February 15, 2022. Known to her family as Granny, she was born just shortly after her twin sister Delores on March 3, 1929 in Chattahoochee Florida to her parents, C.E. and Ola Betts. Elise started working at an early age at the Greyhound Bus Station, later moving to work with the state of Florida. After transferring to Macclenny Florida, she became friends with JP “Shorty” North and his wife Allie Mae, children Nan and Jane who introduced her to her future husband Emory, Allie Mae’s brother. After marrying and moving to Green Cove Springs, Elise worked at the Clay County Health Center for a number of years where she lent a helping hand to her next boss George Carlisle, then Clay County Clerk of the Court. George told her you need to come work for me. So after interviewing, Elise started a long career working as a deputy clerk of court in the county court assisting Judge Tom Rivers, Judge William Wilkes, Judge Larry Smith, and Judge Tom McAnnally, and many citizens along the way with small claims court, traffic tickets and marriage licenses. After retiring from the Clerks Office under then Clerk of the Court Keene, she took a couple of part time jobs before being called back to public service by then Clerk of Court Jimmy Jett where she worked another few years continuing to serve the public. Was named “Mother of Time” for her many years of service at the courthouse, she loved to reminisce of the good times and good people she worked for and with that included members of law enforcement, state attorneys office, public defenders office, various judges and staff. She always made an extra effort to help the general public to feel better after they left than before they arrived. Elise was of the Baptist faith and was a long time member of the Hickory Grove Baptist Church. She loved to read and study the bible and always tried to use the word to help in a time of need. She was an active member of the choir for much of her life and singing was an important part. More than once she sang the National Anthem at events including the Memorial Day Celebration at Spring Park. Family was her pride and joy and she set traditions with grandkids that are still followed today. She was proud of their accomplishments and always tried to give words of encouragement or a good hug when needed. She had the ability to make a bad day better. She made the best lasagna, spaghetti and sour cream cake ever produced and in her fashion, most of the time delivered it after she cooked it which made it even better. Elise was preceded in death by her parents C.E. & Ola, sisters Lorene, Earlene, twin Delores, Elizabeth, 2 brothers at early age, and her husband Emory. She is survived by her son Julian (Marsha), grandkids Lori (Mitch), Marla (Josh) and Jacob. Her greatgrandchildren Kennedy, Emma, Ethan, Olivia and James, along with a host of nieces and nephews. Her family would like to publicly thank Dr Ed Platt and his entire staff for the care you gave her through the years, sometimes going the extra mile, Amy and the Walgreens Pharmacy Staff for their help along the way, many folks at the Clay County Council on Aging, Concierge Home Care for your patience and caring ways, Paula and her daughter Nastacia for your help the last year, Silver Treasures for stepping up in the end to help us in dire need, and a host of friends that are too many to name but helped her in some way, a visit, ride, phone call or a bite to eat, we so appreciate you all in ways words can’t explain. The family asked that in lieu of flowers, you take an extra moment to call, visit or help an elderly person that you may know needing a brighter day. Graveside Services will be held 11:00 a.m. Monday, February 21, 2022 at the Hickory Grove Cemetery with Pastor Russell Franklin officiating. Arrangements under the care of Helm-Gallagher Funeral Home & Cremation Services, 1811 Idlewild Avenue, SR 16, Green Cove Springs, FL 32043. 904-284-9696. www.helmgallagherfh.com

Elise B Priest gained her heavenly wings to be with the Lord, family and friends on February 15, 2022. Known to her family as Granny, she was born just shortly after her twin sister Delores on March 3, 1929 in Chattahoochee Florida to her parents,... View Obituary & Service Information

The family of Mrs. Elise Priest created this Life Tributes page to make it easy to share your memories.

Elise B Priest gained her heavenly wings to be with the Lord,...

Send flowers to the Priest family.